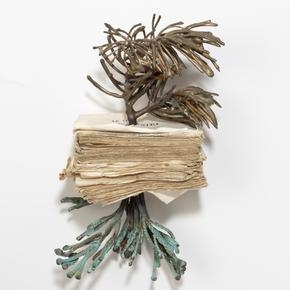 In Passage, her seventh exhibition at Callan Contemporary, Raine Bedsole invites viewers on a psychological, symbolic, and spiritual journey. Deploying new additions to her visual vocabulary as well as ideas she has explored throughout her career—water, contemporary relics, and vessel forms steeped in the syntax of mythology—Bedsole conjures a physical and allegorical voyage through space, time, and psyche. The exhibition’s central element is an installation comprised of abstracted vessel sculptures in welded bronze, copper, and steel. Navigating this passage, viewers become wayfarers as they observe the compositions’ porous contours and latticework of interwoven shadows. Above, alongside, and below, the sculptures seem to float, buoyed along by unseen currents, crossing imagined seas and mythical times. Smaller wall-mounted bronzes surround the passageway, echoing this contemplative focus by referencing some of Western history’s most important thinkers: the Greek philosophers chronicled by the Greco-Roman biographer Plutarch and the Eastern philosophy of Buddhism. With their imagery of books, flowers, thistles, and the Buddha in a serenely meditative pose, these pieces and the larger installation evoke a state of introspection and levitation between literal and non-literal worlds.

Bedsole earned her undergraduate and graduate degrees in art from Auburn University and the San Francisco Art Institute. A prizewinner in the Florence Bienniale and the recipient of a grant from the Joan Mitchell Foundation, she has been widely exhibited and critically praised. Her artworks are included in the permanent collections of the New Orleans Museum of Art, South Carolina Museum of Art, Mobile Museum of Art, and prestigious private, corporate, and institutional collections throughout North America, Europe, Asia, and the Middle East. In September, her 27-foot steel sculpture, Justitia, was unveiled at the newly constructed U.S. Federal Courthouse for the southern district of Alabama. She was recently a visiting artist at the American Academy in Rome and next spring will serve as visiting artist for Kent State University’s sculpture department.

This exhibition also marks the debut of a new series of charcoal and mixed-media drawings, Captured Shadows. Based on shadows cast by the boat sculptures, they incorporate intricate slivers of map and atlas pages, offering a microcosm of the sculptures’ lithely elegant lines and compositional complexity. The vessel forms are composed of blown-glass waterdrops and other nautical elements from the sea, suggesting shipwrecks and coral reefs embedded in the artist’s visual memory—all distinguished by rich patinas, which impart a sense of history and narrative to the work. The boats’ skins are archetypal and visually permeable, exuding the wordless language of legends and oracles while inviting viewers to project their own thoughts and emotions in a circuit of shared symbolism. Bedsole’s iconography serves as a vehicle of transport, a conduit for traversing the metaphoric passages of our lives.