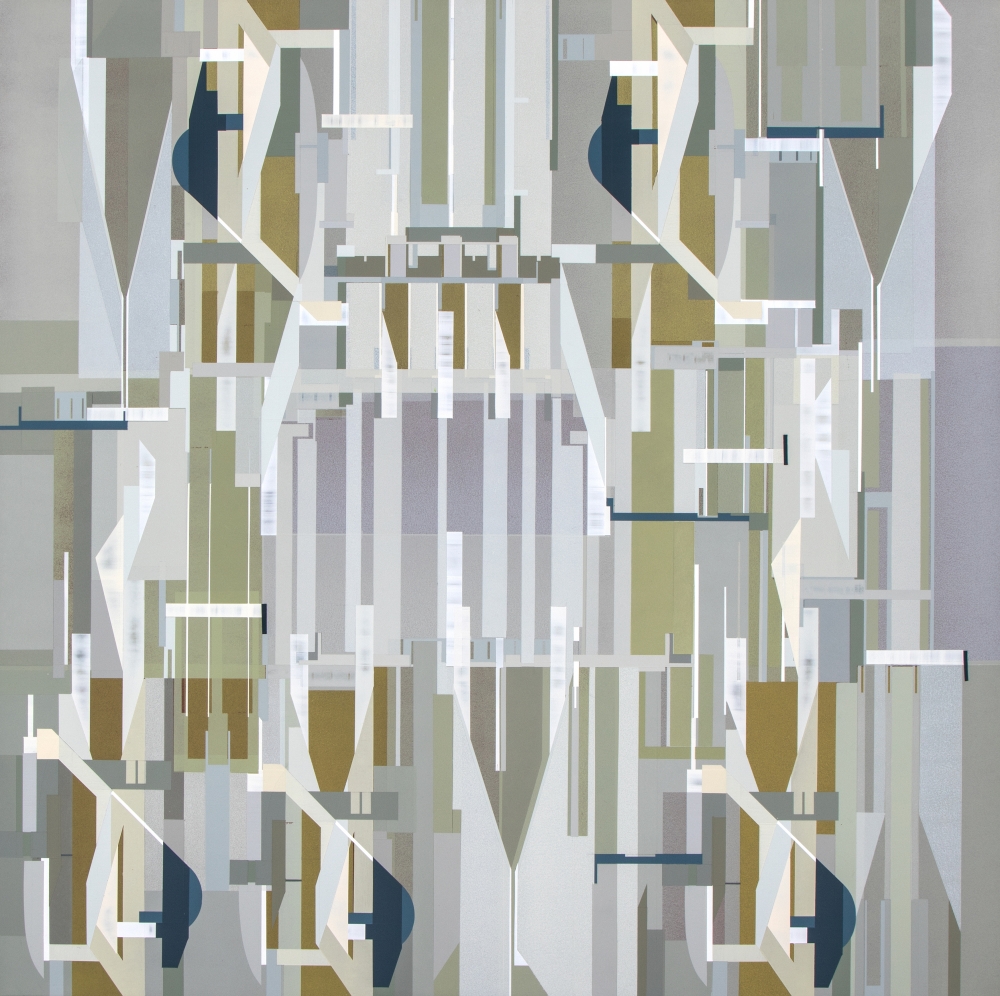 In the latter part of the eighteenth century, Johann Wolfgang Goethe opined, “Music is liquid architecture; architecture is frozen music.” Within his revered dictum, the preeminent literary and aesthetic critic presents the characteristic difference in appeal between the arts portraying statical forms in space, and those dealing with dynamic forms in time. The comparison, either way, is illuminating as it rests in a profound truth that a universal theme prevails and underscores all creative disciplines. It could be said that architects “paint” with materials, a composer “constructs” with vibrations, and the scientist “composes” forms and formulas using the modes of math and physics.

It will come as no surprise that Kennedy, who has spent the better part of twelve years building complex spatial paintings, would find both potency and resonance in the German’s writings, and upon further rumination, the artist found himself straying from the architectural mindset toward the musical aspect of the credo. Beyond the obvious, the auditory, his primary focus became the “visual,” its structure of notes, lines and rhythmic symbols, the conveyance of information, suggestive or definitive, and subsequently the field of exploration for his forthcoming show with Callan Contemporary.

“Notations”, the Irish painter’s fourth solo exhibition with the gallery, could be viewed as an organic progression of many of the components explored in previous shows. Systems, Substructures, and Syntax undeniably inform the compositional placement of a form, line or gesture, and whether it’s role is symbolic, connective, directive, or a combination of all three. Beyond the recognizable configurations of music, there are a plethora of languages adopted to convey specific things, as in the syncopated era of mathematics, when symbolic abbreviations replaced words, the choreographic notations of Laban and Benish, or the Graphic Notations of John Cage and Sylvano Bussotti. Interestingly, the Italian musician’s visual compositions were so dynamic and captivating that he began selling them as artworks.

The process of making these paintings was profoundly informed by the recent creation of a series of Intaglio prints entitled “Transpositions”, now part of the British Museum Contemporary Collection. The labor-intensive process of deconstructing paracosms and complexities through a set of five plates proffered much insight into the fabric of his compositions and their inner-lying hierarchies. Kennedy observed, “When I paint, all of the ingredients are there, overwhelmingly, in my head all at once, and unfold instinctively, but when faced with five separate transparencies, you suddenly have to isolate that information and spontaneously shift from the non-objective to objective head-space.”

In previous incarnations of his work, the painter focused more intently on the connectivity of the compositions, but in this suite of notational works, the artist had to resist his propensity to form strong spatial relationships. He had to address the positioning of an isolated, often repetitive, shape in space, and assemble rhythmic symbols that lead the eye across the canvas. The other challenge was to use his calibrated application of media in its disparate dilutions and densities to provide both structure and landscape for the forms and manifest kinesis in the painting. The result is neither frozen music or liquid architecture, but something intangible, a meditation of sorts where a multitude of vertical and horizontal planes, almost like architectural circuitry overlap and cascade across the frame. The result is a mind walk of artful dimensions.

Born in Northern Ireland, Kennedy studied at the Royal Scottish Academy in Glasgow, where he was also active in the worlds of dance and theater. Now based in New York, he exhibits with leading galleries and art fairs internationally and is represented in prestigious corporate and Museum collections, including The British Museum, Corcoran Group, Saatchi & Saatchi, St. Regis Hotels, and Nordstrom; and private collections including the late Pulitzer Prize-winning playwright Edward Albee.