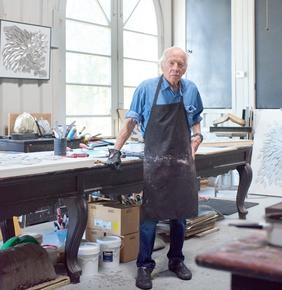 A pair of alligators cruises diagonally from one side of the muddy bank to the other, right in front of the artist George Dunbar’s house — a literal stone’s throw away from his porch. “If you live here, you can really see it,” he says, referring to his neck of Louisiana. “The bayou is so much more serene than a river: It’s a tidal stream, it goes both ways.”

Dunbar’s remote location — about 30 minutes north of New Orleans, perched on the banks of Bayou Bonfouca — has afforded him the solitude required to create a lifetime’s worth of art, in a range of media. “I’m painting with a mop right now,” he says conspiratorially. “We try to continually change and be better around here despite the fact there may not be monetary success.”

Dunbar is an abstract artist, and was selected as Art in America’s “New Talent” in 1955 when his gestural paintings hung in the same galleries as Franz Kline’s and Cy Twombly’s. He might have been a household name if he had chosen to spin around the axis of the art world. Instead, he and his canvases were yanked from New York City — at the dawn of a promising start — to stand vigil at his terminally ill mother’s bedside in New Orleans. “Southern tradition trumps everything,” explains the Whitney Museum trustee Donna Perret Rosen, about Dunbar’s untimely departure from the Abstract Expressionist scene happening in the Northeast. “But you know, he went back not just to take care of his mother, but to find his own voice.”

To pay rent, Dunbar physically toiled as a land developer in Slidell, rising before the sun to carve out new canals and streets. By midafternoon, he’d withdraw to the French Quarter, to teach a drawing class. He was tasked with securing models for the students, which he fondly recalls required a bit of flirting: “I’d give myself an hour, head down to Rampart Street and talk a girl into coming along for the afternoon.” After teaching, he and his charges — and their model for the day — would grab cold drinks at the Napoleon House and talk about art. By midnight, Dunbar would either collapse onto the bed at his nearby Pontalba pied-à-terre or drive back to Slidell, where he had to report to the job site by four a.m. the next morning, to do it all over again. “Energy…” he says, “…I always had a lot.”

Around the same time, Betty Parsons, the New York City gallerist known as the “den mother of Abstract Expressionism,” was introduced to Dunbar on a trip to New Orleans. She requested a picture to hang at her gallery back in Manhattan, so Dunbar quickly shipped her one of his collages, only to call a few months later and ask for it back. He wanted to include it in a local show in the French Quarter. “I was so stupid,” Dunbar laughs. “Betty was launching Ellsworth Kelly at the same time.” It was the mid-1950s — and in New Orleans, the concept of a contemporary gallery didn’t really exist. Artists would show their work in antiques shops alongside old French chairs and dusty chandeliers.

So Dunbar, along with a few local artists, opened the first contemporary art gallery in the South. The Orleans Gallery’s white rooms ultimately became the de facto headquarters for the new Abstraction movement happening below the Mason Dixon. “It had nothing to do whatsoever with Southern art,” Dunbar explains. “None of us considered ourselves Southern or regional artists; we were just a group of people making contemporary work and wanting to show it in a clean space.”

The gallery was a hit. “You wouldn’t have thought in a city that respected antiquity so much, you’d find an audience so committed to modernity,” Dunbar says.

Today, the 89-year-old artist is shockingly nimble, moving purposefully between the cottage he shares with longtime partner, Louisette Brown, and his art studio next door. He wears the same uniform as in his youth: jeans, a denim work shirt, one leather and silver bracelet and a blue bandanna tucked into his breast pocket or wrapped around his head.

The cottage, a modern structure designed by the architect Lee Ledbetter and furnished with rare antiques, sits atop a man-made hill molded by the artist himself. A small Franz Kline work sits discreetly on a guest bedroom bookcase, while a mid ’50s vase by the late ceramist Katherine Choi commands attention on a nearby shelf. “A lovely thing,” Dunbar says about the vessel. “it simply possesses all the sensitivity of China.”

For Dunbar, art is at its best when it straddles the line between handsomeness and brutality. He offers as an example one of his own pictures, from his rag period, that practically covers an entire wall in the bedroom. “I dropped rags from the balcony at my studio — they landed better that way than if you placed them … And sometimes it all just really worked. I find you lose the energy when you go back in and add things.”

His work has found its way into multiple museums since the ’50s — including the New Orleans Museum of Art (NOMA), where he recently had a retrospective show. (When Dunbar moved back to the area to care for his mother, NOMA was called the Delgado, and was as committed as ever to the classical canon.)

In the exhibition’s aftermath, Dunbar can’t help but reflect on his career. “Yes, it was a tremendous decision to leave New York, but let’s put it this way; it wouldn’t have been the same living in SoHo. I raised my children on nine acres with horses.” He thinks for a moment before adding, “And really, time is the only true measure of how good you are. I’m not sure there’s really any other way to measure.”