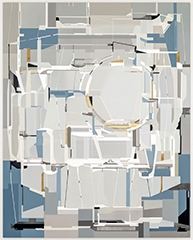 Internationally acclaimed artist James Kennedy returns to Callan Contemporary with sub•struc•tures, a suite of intricate mixed-media paintings on panel.  By turns serene, challenging, and fugue-like in their complexity, the paintings are tours de force of intuitive gesture embedded within meticulous geometry.  Together they explore the idea of substructure:  the myriad layers undergirding the lines, planes, and brushwork built into each composition.  Working on panels of eucalyptus-wood Masonite and a gesso base, Kennedy painstakingly lays down dozens of layers of underpainting—color fields of acrylic paint and glazes, which impart a mesmerizing translucency.  These washes exhibit a self-assured elegance and economy of gesture that complement their subtle chromaticism.  Next, Kennedy uses cutting tools to incise connective lines into the surfaces, effectively constructing each line with architectural precision.  The finished surfaces are nuanced, tactile, and visceral.

Born in Northern Ireland, Kennedy studied painting at the Royal Scottish Academy in Edinburgh.  For many years he has been based in New York City.  His works are showcased at leading galleries and art fairs and have been acquired into prestigious collections around the world.  With their dialogue between organicism and structure, Kennedy’s paintings alternately recall the sensual opticality of Impressionism; the rigorous geometries of Constructivism; aspects of abstracted landscape; and a dynamic push/pull relationship between foreground and background.  Beyond their rich pictorial allusiveness, they project a universality, an open-endedness to interpretation that welcomes the viewer’s own experience.

In the artist’s paintings on eucalyptus Masonite, surfaces seem to emanate an understated luster, owing to the material’s unique uniformity of sheen.  This property enables sinuous undercurrents of gesture to remain visible through strata of color and glaze-work.  The disparate elements intermingle with an almost musical sense of harmony.  While some have a playful, jazz-like visual personality, others project the gravitas and lyricism of a Chopin nocturne.  Across this continuum they share an extraordinary sense of balance, order, and vitality.  “I think of the paintings as having a kind of language,” Kennedy observes, “similar to a mathematical equation.  The ‘solution’ could have millions of variations, but for me, it comes down to connectivity—the moment when all the parts, all of which have their own structures, finally connect, and you say, ‘Yes, that’s it!’”