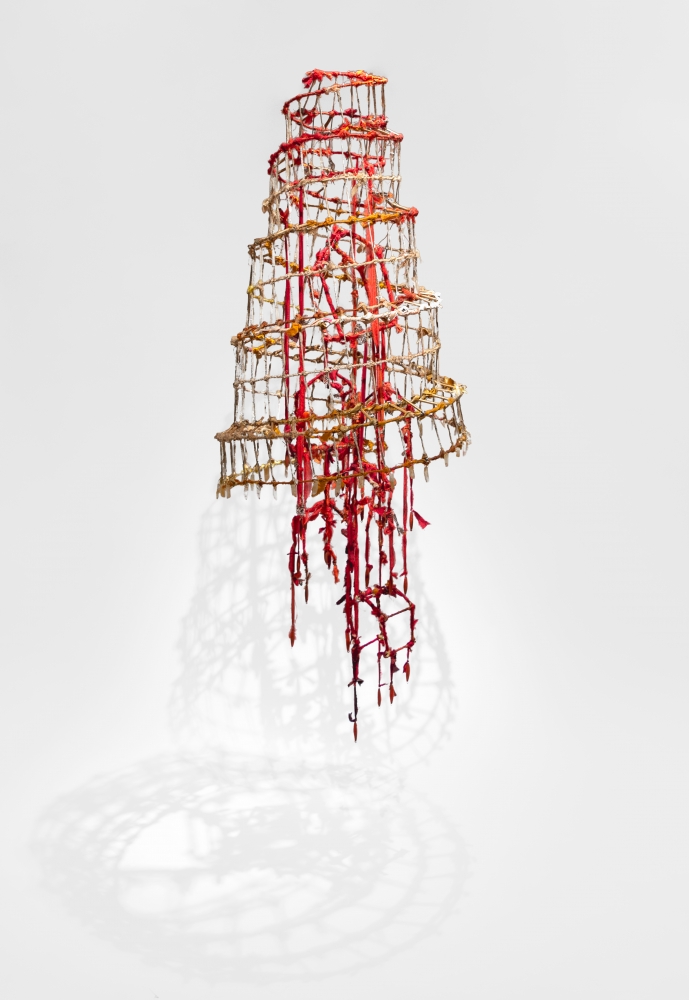 Receptions with the Artist:

In Water and Dreams, her eighth solo exhibition with Callan Contemporary, Raine Bedsole revisits and reinterprets many of the symbolically rich motifs that have fascinated her throughout her career. Her haunting, densely layered mixed- media sculptures and works on paper often reference the allure of faraway lands, the journeys we take to reach them, and the yearning that often follows to return to the sanctuary of home. This timeless narrative of the human adventure— which bridges nationalities, political differences, and belief systems—is central to the artist’s longstanding interest in water bodies and the roles they play in history, world religions, and literature. The exhibition includes a suite of the graceful, highly allusive boat forms with which Bedsole has become indelibly associated; a large “shadow drawing” based on the intricate web of shadows cast by the boat sculptures; and an array of sumptuously colorful oar sculptures, which incorporate fabrics, brass, copper, metallic leaf, historic maps, and crystals.

Bedsole earned her undergraduate degree in art from Auburn University and her Master of Fine Art from San Francisco Art Institute. She has been critically praised and widely exhibited in North America, Europe, Asia, the Middle East, and Australia, with artworks in the permanent collections of the New Orleans Museum of Art, South Carolina Museum of Art, Mobile Museum of Art, and The Mellon Collection. A prizewinner in the Florence Biennale and a visiting artist at the American Academy in Rome and at Kent State University, she has received public-art grants from the Joan Mitchell Foundation and was commissioned in 2018 to create a 27-foot steel sculpture, Justitia, for the U.S. Federal Courthouse, Southern District of Alabama. Her career is the subject of a richly illustrated 250-page book, Material/Myth/Metaphor: The Artistic Vision of Raine Bedsole, to be published this autumn by Callan Contemporary.

One of the most striking pieces in the current exhibition is a mixed-media sculpture entitled Beacon. Nearly five feet tall, it recalls the utopian towers Bedsole depicts in an ongoing series of drawings. Adorned with exotic fabrics and citrines, it is a powerfully ambitious work whose spiraling, ascending composition parallels Bedsole’s own aesthetic evolution as she circles back to signature motifs, informed by new perspectives. Notably, the show’s title, Water and Dreams, is drawn from a 1942 essay by Gaston Bachelard in which the philosopher reflects on the constancy of change. The key to thriving through life’s many stages, he suggests, is to cultivate a kind of psychological and spiritual fluidity, “which guides us though the journey, through oceans of people, and keeps us on course through the storms.”