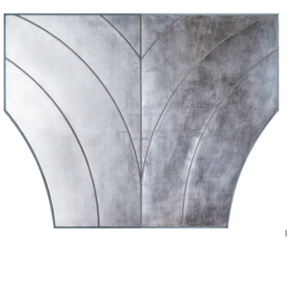 In Palladium, his fourth solo exhibition at Callan Contemporary, critically acclaimed artist George Dunbar (b. 1927) explores the beauty of one of the world’s most alluring metals.  Dunbar has long used palladium leaf, a distilled form of platinum, to impart a unique luster and a sense of character and history in his powerfully dynamic compositions.  The mixed-media paintings and sculptures in the exhibition, all of which incorporate palladium, range from 1999 to the present and encompass the artist’s work in relief, hard-edge abstraction, and figuration.  “I thought it would be interesting to show the connections of my different periods of work by using a common medium, in this case palladium leaf,” Dunbar notes.  “It works beautifully with the white clay we use and has a purity and sterility to it that is unique in art.”  The artist first encountered metallic leafs in baroque shrines throughout Europe and Central America and has for many years incorporated them into his pieces—layering palladium, gold, or silver leaf atop multiple layers of fine clay, then distressing the surfaces with specialized tools.  The finished works exude an aura of extraordinary refinement and elegance, counterbalanced by a sensual, organic tactility.  The exhibition at Callan Contemporary follows the artist’s career retrospective, George Dunbar:  Elements of Chance currently on display at The New Orleans Museum of Art.

Dunbar studied at the Tyler School of Art at Temple University and the Grande Chaumiere in Paris.  Since 1953, his paintings and sculptures have been exhibited across the globe and are included in some of the world’s most prestigious private, corporate, and institutional collections, among them The British Museum (London), New Orleans Museum of Art, Ogden Museum of Southern Art, and North Carolina Museum of Art.  Critics have praised his instantly recognizable style in both national and international publications such as ARTnews, Art in America, and La Revue Moderne. He has played a seminal role in nurturing contemporary art in the American South, beginning in 1957, when he co-founded Orleans Gallery, New Orleans’ first artist’s co-op and a nexus for contemporary art across the region.

Uniting Dunbar’s diverse bodies of work is an invigorating quality of gesture and composition, which flows from his early exposure to the action painters of the New York School.  Major influences on his aesthetic development included Willem de Kooning, Cy Twombly, and Franz Kline—the latter of whom Dunbar knew personally and exhibited with, while in Philadelphia in the 1950s.  “Franz Kline’s gestural work had so much to do with energy,” he reflects.  “He would point out an area to me where one of his large brushstrokes went off the corner, and he’d say:  ‘You see this mark?  I could ‘correct’ this compositional ‘flaw,’ but if I go back and change the composition, I’m going to lose the energy.’”  Dunbar incorporates the exuberance and kineticism of Abstract Expressionism into his artwork to this day.  “The motion that you put into gestural work gives off an energy,” he says.  “You give up control, but you create energy.  I still use the gestural style in my raised surface work.  In periods of my work such as my Rouville series, even though I’m using modeling paste, I use the same gestural vigor to apply the shapes to the board.”

Painting daily in his studio overlooking Bayou Bonfouca, Dunbar pivots effortlessly between two- and three-dimensionality, luxuriance and austerity, control and the spontaneity of what he terms “the accidental triumph.”  In the palladium pieces, the metal’s icy glow emanates a hushed, pristine ambiance that is almost glacial in its immaculateness.  With their complex surfaces, evocative forms, and gestural vitality, George Dunbar’s paintings and sculptures bear the hallmark of an aesthetic visionary and innovator.