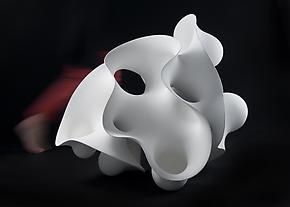 At the time, the parallels between her day job and her artistic pursuits were not apparent; but in more recent years she has come to see their central concerns as analogous. Physical therapy, like sculpture, focuses on structure, motion and the sometimes tenuous lines between balance and imbalance, function and dysfunction. Like a therapist, an artist faces specific technical problems each day and sets about solving them through an integration of formal principles and improvisation. Finally, the end goals of both disciplines are physical manifestations — dynamism, harmony, equipoise — that carry metaphysical implications.

Although she has been a full-time artist for more than a decade now, shaping and refining clay rather than human bodies, she brings to the pursuit a healthcare pro- fessional’s sense of empathy and compassion. In her studio in Sparsör, in the southwest of Sweden, she creates challenging, immaculately beautiful sculptures that synthesize organicism and ethereality. With their bulbous protrusions, sin- uous curves and ultra-smooth surfaces, the works look simultaneously like pods, freshly sprouted from the earth, and spaceships freshly arrived from another gal- axy. Each work is monochromatic, either in pristine white or rich, chocolate black, and results from a four- to six-month-long process. Hild shapes stoneware clay into coils, allowing plenty of drying time, then fastidiously sands and sprays themwith kaolin coating to impart a preternaturally matte finish. Finally, she fires them at 1,250 degrees Fahrenheit, ending their long genesis and beginning their new journeys as objects d’art.

The results are striking both for their Frank Gehry-like architectonic complexity and the refinement of their surfaces. They undulate, fold and unfold within and upon themselves like Möbius strips, origami or the blooming contours of a trumpet’s bell. Biomorphic contours dialogue with themselves and with the space outside and inside their parameters.

In Hild’s work, as in Georgia O’Keeffe’s well-known cow-pelvis paintings, circles and ovals become portals through which the viewer may glimpse alternate realities. The voids carved into the compositions exert pro- found impact on the space that surrounds them, directing the eye, the psyche and the spirit in ways that recall the Japanese concepts of ma (negative space) and wabi sabi (beauty that comes from absence).

“The Japanese way of the duality is very interesting. I have worked with it unconsciously all the time and in recent years have been more attentive to it. I like the idea of non-present presence,” said Hild.

Hild’s flowing shapes and allusive cavities pour forth not only from her hands and mind, but from the fount of her emotions as well. She chan- nels her emotional life into the work in a metaphoric fashion, using her experiences to explore the polarities of extroversion and introver- sion, jollity and sadness, exuberance and regret. “Overall, the work is about lightness, power, strength, fragility, self-sufficiency and porosity. It is a reflection of my inner landscapes of form. Every day, I experience the tension between presence and absence. The anxiety I feel is both constructive and destructive. My sculptures show me the necessity of opposites; they are paradoxes,” she observed.  The works are also subtly influenced by the physical landscape in which she lives and works: an area near a lake, where wooded areas give way to clearings as part of nature’s ongoing conversation between density and sparsity.

Hild’s oblique connection to the land stretches still further back. Her grandfather was a landscape painter who specialized in depictions of the Swedish countryside. He owned a paint shop and kept her supplied with art materials. As time went on, she began working in ceramics, a medi- um whose practicality and straightforwardness she appreciated. When she began studying art formally, however, it took a while for her to find her unique voice. Notably, during undergraduate studies at the Gerles- borg School of Fine Art, she put ceramics aside and began exploring other media such as painting, sketching and text-based work. It was dur- ing her last year of graduate studies at the University of Gothenburg that she returned to ceramics with fresh perspective and discovered the virtuosic forms that have become her signature.

During the early 2000s she developed this style, making her New York debut in 2005 and receiving rapturous critical reviews in the years that followed. Her New Orleans debut came in 2008 with Eva Hild: New Work, an exhibition at Gallery Bienvenu, where she returns this fall.
In the meantime, she has been commissioned to create large-scale sculp- tures in other media, including cast aluminum, stainless-steel, and paint- ed and patinated bronze. These works, permanently installed at various sites across Sweden and South Korea, speak in a plethora of different chromatic and symbolic languages. The hushed, contemplative timbre of her white works find counterpoints in the metal sculptures’ stalwart implacability and tensile finesse, while her works in brown-black ceramic emanate a seductive, vaguely dangerous savoir faire. Across diverse media, the works remain indelibly linked to Hild’s personal experience of the world in all its complexities.

“My inspiration is the ever-changing landscape of my own life and envi- ronment. I try to relate my work to my life: what is happening and how does it feel? Pressure, slowness, strain, ramification, inside turned outside... As a starting point I put words onto my feelings and use the vessel form to translate this into three dimensions,” she explained.

This capacity to distill and embody her own innermost thoughts — and the dreams, fears and hopes we all share — may be the ultimate source of her work’s elegance and power.