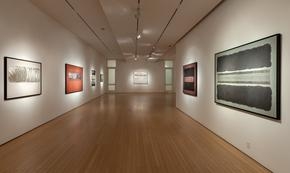 At age 88, however, Dunbar isn’t resting on his considerable laurels. And “The Surge,” his current show at Callan Contemporary, features some of his most engaging works yet.

Occupying a space somewhere between painting and sculpture, Dunbar’s new mixed media pieces are made up of as many as two dozen layers of clay, pigment, and metallic leaf on panel. Dunbar then cuts into, scores, and “excavates” the layers using a variety of tools.

On the page or computer screen, Dunbar’s works can look like typical abstractions. But it’s their presence as three-dimensional works of art that sets them apart.

The surfaces of Dunbar’s pieces expand and, indeed, surge from the panels, each one dense with a network of cuts, scrapes, and gouges offset by the precise elegance of the artist’s application of color and metallic leaf. The combination of order and entropy is a hallmark of Dunbar’s work, and reflects how the natural motifs which inform his process similarly combine chaotic and random textures with an underlying geometric framework.

A mesmerizing (and wordless) video produced by the gallery to mark the occasion of the exhibit shows Dunbar creating several of the works in his studio.

The video also shows glimpses of the landscape around Dunbar’s home and studio on Bayou Bonfouca outside of Slidell, and conveys how natural elements and motifs from his surroundings landscape find their way into his work.

The rippling waves in a lily pond are echoed in the striations which intersect across the surfaces of works like “Des Glaices” and “La Rouge Grand”. The pattern in “Maurepas” recall the sinuous converging diagonal lines of a palmetto. And works like “Barataria” and “Laurent” give the impression of looking through a window to a sunrise or sunset reflected over a wetland landscape.

But it’s important to keep in mind that Dunbar’s approach to the subjects which inspire him is more impressionistic than strictly representational.

“I’m not someone who paints nature in a representational way,” said Dunbar in a statement about his current show, “but I do believe that living over the wetlands has influenced my work. During the storms I can see large, almost iceberg-like pieces of debris floating out the bayou. In an abstract way, you could find a relationship between those forms and the forms I seem to return to.”

And much of the power of the works in “Surge” derive from that sense of keen observation and lived experience that Dunbar manages to incorporate in his finished pieces. As such, and despite the formal qualities the works have in common, each one has its own distinct presence and mood.

“People like to ask me what my favorite piece is,” he said. “I tell them, ‘When you walk into your studio every day, you have to feel you haven’t made your best piece yet. There’s always an opportunity to do something different and better.’”