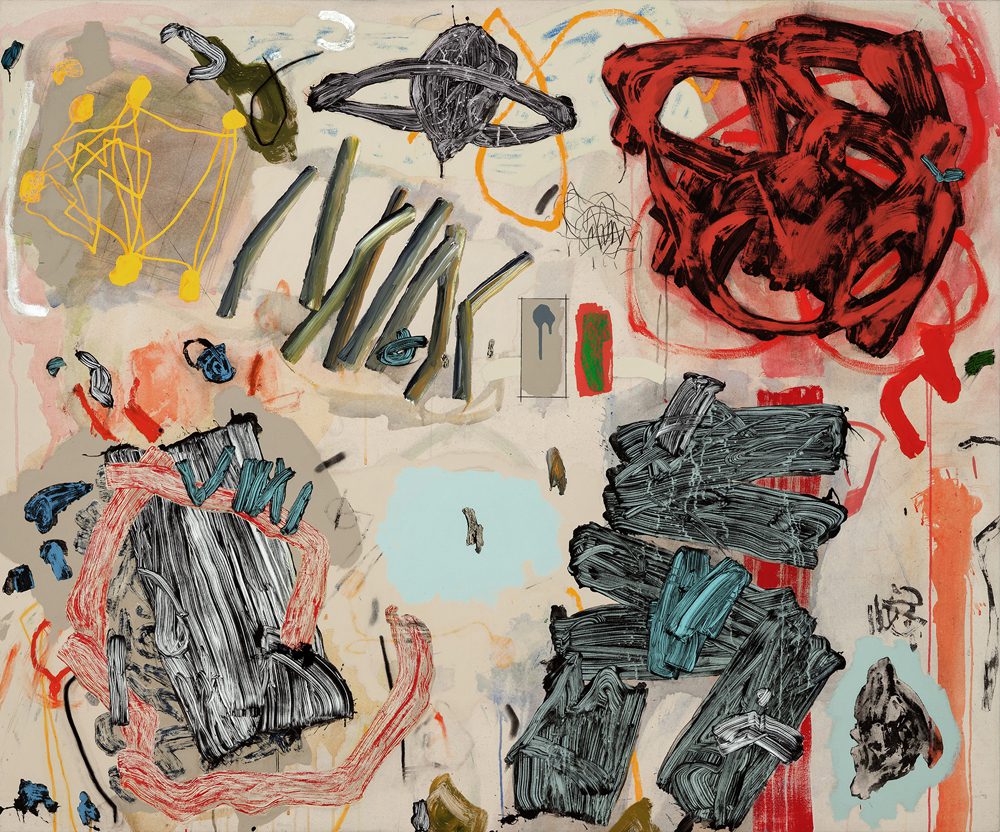 Pareidolia is the psychological phenomenon by which our brains assign familiar images like faces, landscapes, and animals to completely random stimuli—scientific proof that our minds really can play tricks on us. It was a great comfort to read about the phenomenon after experiencing what I thought was a mild psychosis in front of Doyle Gertjejansen’s new paintings at Callan Contemporary.

Standing before Gertjejansen’s works for the first time, I was initially struck by their massive scale: five- and six-foot canvases whose surfaces are occupied by gargantuan brush marks. What’s impressive is not only that a great deal of these marks are bigger than a small child, but also that there’s an observable variation of brushwork. Here, acrylic paint is thick and shiny, flat and graphic, thinned to a wash, juxtaposed with liquified dirt, and even overlaid with graphite to produce a unique graffiti-like quality that somehow reads both matte and lustrous. The actual mark-making, too, is so varied that each composition, not to mention the ten works on view taken together, feels like a comprehensive survey of the powers of a paintbrush.

This diversity is so conspicuous across every canvas that it becomes difficult at first to think of much else beyond the marks themselves. I often found myself nearly nose-to-nose with the paintings’ surfaces, trying to work out a logical sequence in the layering of brushstrokes, but each time I was foiled by some rogue wispy black line that seemed at once in front of and behind another shape or noticed some miniscule speckling of paint or tiny swatch of color that certainly could not have been there a minute ago. Perhaps it was a kind of manic dizziness from the continuous movement toward and away from the canvases, my eyes darting ravenously, that transformed a mossy green swipe of paint combined with the black and white J-shaped mark in the top left corner of Yellow Dots…Connected, 2017, into a squawking toucan. And why was there a squawking toucan next to a slightly misshapen, potentially melting planet Saturn? And who is going to save Two Moons, 2017, from the silver-eyed monster with a bulbous grey nose looming ominously over its composition?

No matter how near or far I moved, no matter to which painting I turned, every rounded shape became an eye or celestial body, every elongated form a human or slithering reptile, every haphazard splash of paint an explosion. Any artist that lays bare such a breadth of painting’s devices as Gertjejansen is clearly contemplating the medium of painting itself as a subject, but there I was, unable to see anything but tropical birds, fantastical demons, and other narrative imagery. But perhaps Gertjejansen’s abstract painting can encompass those things too, however indirectly.

As evidenced by phenomena like pareidolia, we know the world around us is anything but straightforward and simply explained; beauty is always in the eye of the beholder. “Faith and Reason II” is as much about abstraction as it is about reality, or the definition of reality. Gertjejansen’s marks are undeniably loaded with interpretative potential, so that what appears at first as a non-representational exploration of space, form, line, and color has the ability to slowly morph into something else entirely, something deeply rooted in the representational and the unconscious.

With the exception of the densely packed Petroglyph, 2016, Gertjejansen’s compositions have a newfound sense of space compared to older works whose forms feel more tightly woven. It’s this breathability, as well as a more earthy color palette, that promotes a feeling of ease in the gallery that draws the viewer in without urgency, allowing but not forcing one to play the part of archaeologist and interpreter. Gertjejansen provides the marks, and it’s up to the viewer to put into practice what we all do everyday: sift through, condense, and give meaning to the world around us.