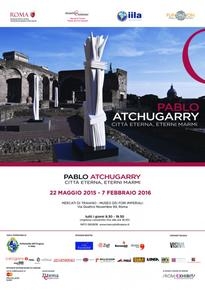 The exhibition consists of a collection of 40 works, including ten monumental pieces that will be exhibited in the open air. Almost all of these works have been sculpted from Carrara marble, a material that has served as an indispensable source for the unique masterpieces from Antiquity and the Renaissance found in Rome.

Atchugarry’s skill signals an intention to revive our ancient and magical relationship with statuary, using his delicately ascending compositions to evoke undeniable references to a classicism that belongs deep within us, nourishing the sensibility of those who admire the “eternal marbles”.

The Museo dei Fori Imperiali - Mercati di Traiano rightly belong to the list of legendary sites that preserve the vestiges of such a memory. The title of the exhibition, “Eternal City, eternal marbles”, refers unmistakeably to the use of Carrara statuary, stretching from the Rome of the Caesars to Michelangelo’s Renaissance and on through Bernini’s Baroque to the present day.

Admiring the monumental works on display in the open air offers an understanding of just how that journey of more than two thousand years has reached its logical conclusion here.

A work such as the Grande Angelo, sculpted in 2006, is capable of dispelling the image of a ghost in the hypothetical wings and, somehow, against the backdrop of ancient arches, accentuates a palpable outdoor vocation that defies spatial constraints. As we can deduce from a similar example, the pull of the figure, intertwined with the history of Carrara marble, constantly lingers in the work of Atchugarry as an ideal starting point from which to pursue the heights of the sublime that rests in the abstract transformation of a thought demanded by extraordinary references. But movement does not always move upwards. Pomona, sculpted in 1994, sees the blossoming of a bud of compactness at the centre of a form that crumbles all around it into multiple, pleasingly elegant folds. While Vertunno rests firmly on the ground before opening its fan of lateral flowers, where emptiness and volume alternate in a quest for lightness.

As a corollary, a similar number of smaller sculptures are also on display. Finally, the rooms located across the building’s four floors will be occupied by small compositions also sculpted from Carrara marble and the painted bronze recently favoured successfully by the Uruguayan artist.

The works create a dialogue between one another, forming connections without overwhelming the imposing nature of the backdrop; they are contextualised within the architectural space, keeping the magic alive.

These marble sculptures have finally found their optimal space and the immobility of time; the concept of equilibrium and harmony is not conditioned by the size of the sculptures, the themes tackled or the substance on which the sculptor’s invention is brought to bear. They feed the eternal creativity of the marble, proclaiming the glory we now have the wonderful and noble opportunity of admiring at the Museo dei Fori Imperiali.